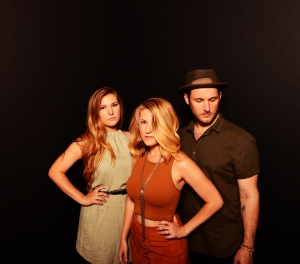 NYC-based Saint Adeline is a close-knit indie band consisting of siblings Drew, Kasie and Chloe Gasparini. Though they’ve each pursued different outlets for artistic expression – Drew as a composer, Kasie as an actress, and Chloe as a solo artist – music has always brought them together, and Saint Adeline merges their eclectic passions into one beautiful sound.

A lifetime of practice became a reality October 2015, when the siblings finally joined forces to form Saint Adeline. The formation of the group happened almost by chance, when Drew asked Kasie and Chloe to join him on stage at Webster Hall. The chemistry between them was undeniable, and they knew right then that they had something special. To the trio, Saint Adeline is home. They write from the heart, they write from experience. The siblings’ bond solidify and strengthen their band and music. Given their varied backgrounds they each bring something different to the sound of the group.

“Status Quo” is a lively, harmony-filled folk-rock song off of Saint Adeline’s upcoming self-titled EP. Their sound is reminiscient of The Lumineers. Saint Adeline recently played at The Highline Ballroom and have an upcoming show at Rockwood Music Hall, one of my favorite venues, on December 15.