I was held up last night in the subway. They got $5! But, seriously Bandits on the Run will steal your ears while you wait for your train and you will willingly give them cash and love every minute of it.

The scene of the musical crime was the 2nd Ave. F train platform going uptown. The train was late and those Bandits on the Run made it amazing. I had just come from seeing a band play at Rockwood Music Hall but I was more blown away by Bandits on the Run. I snatched up one of their 5 song EP’s and truly enjoyed their set, which included a raucous cover of “Come on Eileen.”

Bandits on the Run are from Brooklyn and are Adrian Blake Enscoe as Roy Dodger, Sydney Torin Shepherd as Bonnie Jean (a.k.a. Bonanza Jellyfish), and Regina Marie Strayhorn as “Clarissa.” They all wear bandanas.

Get a taste of “Potted Plant,” their submission to NPR’s Tiny Desk Concert. Then pray they hold you up on the subway. 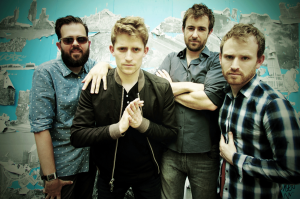 Today, D.C. indie rock band Clones of Clones released their new single “Monster Heart” from their upcoming LP “I Don’t Need Your Love.” It’s very shoegaze and it’s different and I like it.

Clones of Clones are playing in Brooklyn at Trash Bar Saturday, April 18.

Check out “Monster Heart” and let me know what you think!

Their brand new 2015 album Golden Time is streaming above on SoundCloud. It is available at iTunes.

It was fully funded at PledgeMusic and they are currently signing and mailing out all CDs and Vinyl, which can also be purchased locally and internationally at their website.

Late Cambrian recently completed a successful UK, Ireland, Netherlands, Germany Tour in October of 2014, and they are currently in the studio rehearsing Golden Time for the stage.

Saturday, April 19 was my first Record Store Day. I went to Brooklyn. First stop was Rough Trade Records, where at 11 am the line was almost to Kent St. (The Ugly) Second stop was Earwax Records which is a tiny, but ambitious entry into Record Store Day. They didn’t have any of the special releases I was looking for, like The Muppet Movie (they ordered one copy?!) or Jill Sobule’s Dottie’s Charms or Regina Spektor’s You’ve Got Time (from Netflix’s Orange is the New Black.) (The Bad) I did get the Original Motion Picture Soundtrack to the 1980 film Times Square for $11.99. Earwax has a $15 credit card minimum so I bought a 45 of Frankie Goes To Hollywood’s Relax for $3.99.
Not deterred by the disappointment of the morning I headed to the Opening Day of The Crate record Store a few stops down the L line in a very industrial area but easy to get to. I arrived at 12:15 just as the doors were opening. The Crate is a true find. All the vintage vinyl you can carry for $1 per record. Their specialty is artistic and creative uses of vinyl. They also had some adorable children’s record players. I even got interviewed by a journalist from 1010 wins during which I publicly admonished my ex-boyfriend in Lincoln for keeping all my records after we broke up. But I digress.
So what did I buy? 13 albums and by the way no credit card minimum. Highlights are pictured above.(The Good)
The final cap to the day was a set by Milagres at Rough Trade at 5 p.m. There was still a line down the block but the bouncer let me pass so I could see the show. The Rough Trade store has a very cool, intimate venue. I got a vodka cranberry cocktail and enjoyed the set of my favorite Brooklyn band who I listen to all the time but haven’t seen live in a while. They played songs from Seven Summits, Glowing Mouth and their latest release and an amazing album Violent Light. Milagres just gets better with each progressive album. I discovered their music via the blog The Music Slut and back then they were called The Secret Life of Sofia. I saw them play a few shows in 2009. Then they changed their name and signed to Kill Rock Stars, and have released two albums since. Lead singer Kyle couldn’t be nicer and they are on twitter @Milagresband so go follow them and buy their music. (The Good)

Not bad for my first Record Store Day. And I will be back blogging more regularly. April was a month of some tragic stuff for me but everything’s OK now. Thanks for reading. Stay tuned for my review of Jill Sobule’s Album Release Show at City Winery on the 24th and my review of Amy Lynn & the Gunshow’s new album and Joe’s Pub show on May 8.