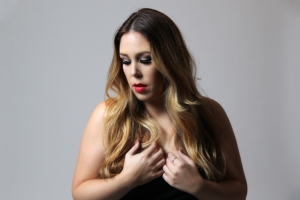 Nashville-based singer Holly Elle is an amazingly versatile independent artist whose remarkable voice stands out on her new single “How a Heart Breaks.” With soul infused pop as a point of reference – and the mantra “No labels, no rules, no limits” – Holly arrives with verve, vision and vibe.

There are complex dimensions to Holly’s ever-evolving artistry. Whether fronting a full throttle band, commanding a concert stage with electronic tracks or in an intimate venue accompanied by only an acoustic guitarist, she is equally enthralling. “The whole point of making music is for me to connect,” she confirms.

Originally from Chestermere, a small community just outside of Calgary, Alberta, Canada, Holly’s earliest musical influences were nurtured by her parents’ house parties as a community of European immigrants shared the sounds of their respective musical heritages. Extended car trips with the family introduced her to a soundtrack of Sixties and Seventies classics and the Brit-pop brought back from England by her brothers who were studying abroad provided a modern melodic counterpoint.

Holly’s journey to Nashville reminds me of one of my favorite films, “The Thing Called Love.” Samantha Mathis travels from New York to Nashville as a fledgling singer-songwriter whose first stop from the bus station is the open mic at the Bluebird Cafe. Holly’s story is quite different, but there is an amazing community of artists in Nashville creating in Music City, which Holly has joined.

Classically trained with a Bachelors of Music in Vocal Performance from Winnipeg, Manitoba and a Bachelor’s degree in Music Business at Nashville’s distinguished Belmont University, Holly has performed at clubs, showcases, and writer’s rounds in the fabled music capitol.

Holly appreciates both her career as an independent artist and her adopted city. “I love the feel of Nashville,” she says. “It helps me to take a breath and to slow down.” The connecting theme in all Elle’s work is a flair for theatrics that sets her apart from other pop artists.

For her latest single, “How A Heart Breaks,” Holly returns to her musical roots of R&B and continues on the path she set out on to release a string of solid singles instead of projects, to bring passionate music right to the listener as it’s happening.

Holly puts her own spin on my favorite subject of song, the broken heart, in “How a Heart Breaks.” It’s aching yet not over-dramatic. Holly’s voice is pure and evocative and her passion comes through the lyrics.

From song to stage to video and beyond, Holly celebrates all of the elements in her escalating career and her goals remain simple and sincere. “Loving music, continuing to make it, and finding an outlet,” she concludes.