Are you mad about Mad Men? I have watched every episode since the pilot and was hooked from day one. If you are a true fan you will love Matthew Weiner’s Mad Men exhibit at the Museum of the Moving Image. The exhibit begins with the story behind Matthew Weiner and the creation of Mad Men. The pilot was a writing sample given to David Chase to get the job writing for HBO’s The Sopranos. AMC wanted to get into original programming and brought Matthew Weiner’s Mad Men to our televisions. Now entering its final 7 episodes, Mad Men premieres Sunday April 5, 2015 at 10 p.m.

I was really impressed with the collages that inspired the character’s costumes. Behind each, these reminded me of inspiration boards pre-Pinterest. I wish I could have taken close-up photos of them. Mad Men’s costume designer Janie Bryant really has always impressed me with her attention to detail and how she dressed everyone perfectly to suit the era and personality. 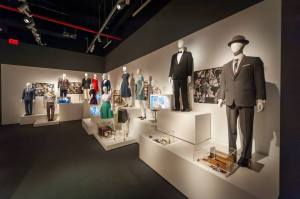 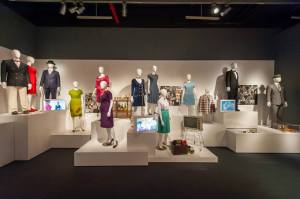 Two sets were struck and transported for the exhibit. First was the Draper family’s kitchen. The attention to detail, from the cookbook to Betty’s cigarettes, was amazing to see up close. 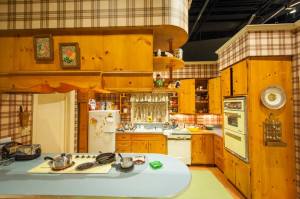 Second was Don Draper’s office. I loved everything about it. My favorite is the vintage ashtray. Again, so nice to see up close.

Mad Men’s attention to detail as seen in Don’s dog tags. He also had three different business cards, shown in the exhibit. 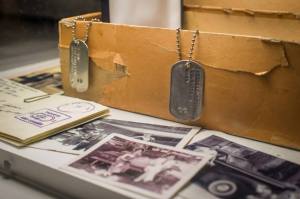 The Writer’s Room, always a fascinating part of any show as great as Mad Men. 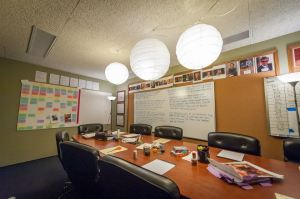 The cast members and Matthew Weiner showed up at the exhibit! John Slattery, January Jones, Christina Hendricks and Jon Hamm.

On Sunday, Matthew Weiner was interviewed at the Museum of Jewish Heritage. He is really very astute, articulate and truly passionate about Mad Men. He’s so smart and funny and every time an audience member sneezed, he blessed them. My Mom and I had 5th row center seats. It was such a great event! The theme was Jews in Advertising but really it was a lot about Jews in Mad Men. How they were portrayed and referred to. Fascinating. I could listen to Weiner for 2 more hours. While he said he wasn’t a great student at his L.A. private school and Wesleyan University, he is so intelligent! He is only a few years older than me. As a writer I can only dream of creating such a world on paper brought to life on the small screen. What a success story! 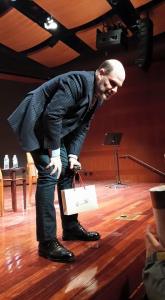 Thank you for reading. What do you love most about Mad Men? How should it end? What year do you think it will be?